The work on my installation piece for Cementa 15 has been a stop/start affair, even since refocusing and finding a new direction for the work after my Fire Station Arts Centre residency in late 2013. So it is with nearly all the sensory works I’ve been producing since 2008…they seem to all have long gestations.

The reality for me as an artist is that I juggle many commitments, including running a full-time media and marketing communications business, and mothering a teen. My art making is also split across various activities, including photography, video production and filmmaking.

Between 7-13 December, I’ll be working from Kandos Projects in the main street of Kandos, undertaking another residency to progress my work for Cementa15, titled Indicatus. To have a week dedicated to just working on one installation piece, on site, is going to be highly valuable to getting this work over the line. My bags are almost packed – with every piece of technology I’m likely to want to utilise over the next 7 days, a plan to work out the logistics of the space in Kandos with some of the motion sensor sound boxes ready to try out, maybe doing some new sound recordings, conducting a social commentary project with a showing of something before I leave, and my teen offsider coming along as my documentary photographer. I’ve even packed meals for every night we’re there so I don’t have to think about what’s for dinner at any stage…or have the resident teen ask me what’s to eat. 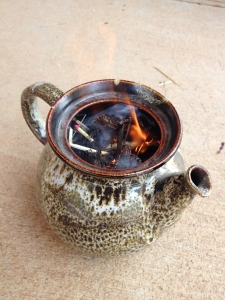 Burning feathers and horse hair in a teapot – smell experimentation

The last three days have been trying to get elements of the Indicatus work to a point where my time at Kandos Projects will make sense. There have been more sound recordings to transfer to the motion sensor sound boxes, some experiments with the smell component of the work (not so successful to date), documentation and ordering more items for the work. The remainder of the summer will be spent refining the sound and producing the video before pulling it all together for a test run sometime towards the end of February/early March. Cementa runs from 9-12 April.

I’ll update the blog after my week in Kandos to see if I’ve managed to be as productive as I’m anticipating.